Southwest Ohioans To Steve Chabot: We Haven’t Forgotten Your Votes to Repeal the ACA

CINCINNATI — Last Friday, as health care advocates around the country celebrated the 8th anniversary of the Affordable Care Act (ACA) becoming law, constituents of Republican Representative Steve Chabot (OH-1) hosted a press conference outside the congressman’s Cincinnati office to send him a clear message: Ohioans haven’t forgotten his votes to take away their health care.

Surrounded by southwest Ohioans holding signs in support of the Affordable Care Act, speakers at Friday’s press conference highlighted the successes of the health care law and blasted Rep. Chabot for voting to take away health insurance from millions of Americans. Sally Gasior, a Chabot constituent whose son has cystic fibrosis, credited the ACA for helping her son maintain his health and live a normal life.

“A lot of the protections of the Affordable Care Act are important,” said Gasior, referring to the ACA provisions that prohibit lifetime caps on benefits and prevent insurers from discriminating against individuals with pre-existing conditions.

“Because he has great coverage, he’s able to be a productive citizen and work and pay taxes. He was able to buy a home and, you know, live what looks like on the outside to be a pretty normal life, even though he has these special medical needs,” Gasior added. 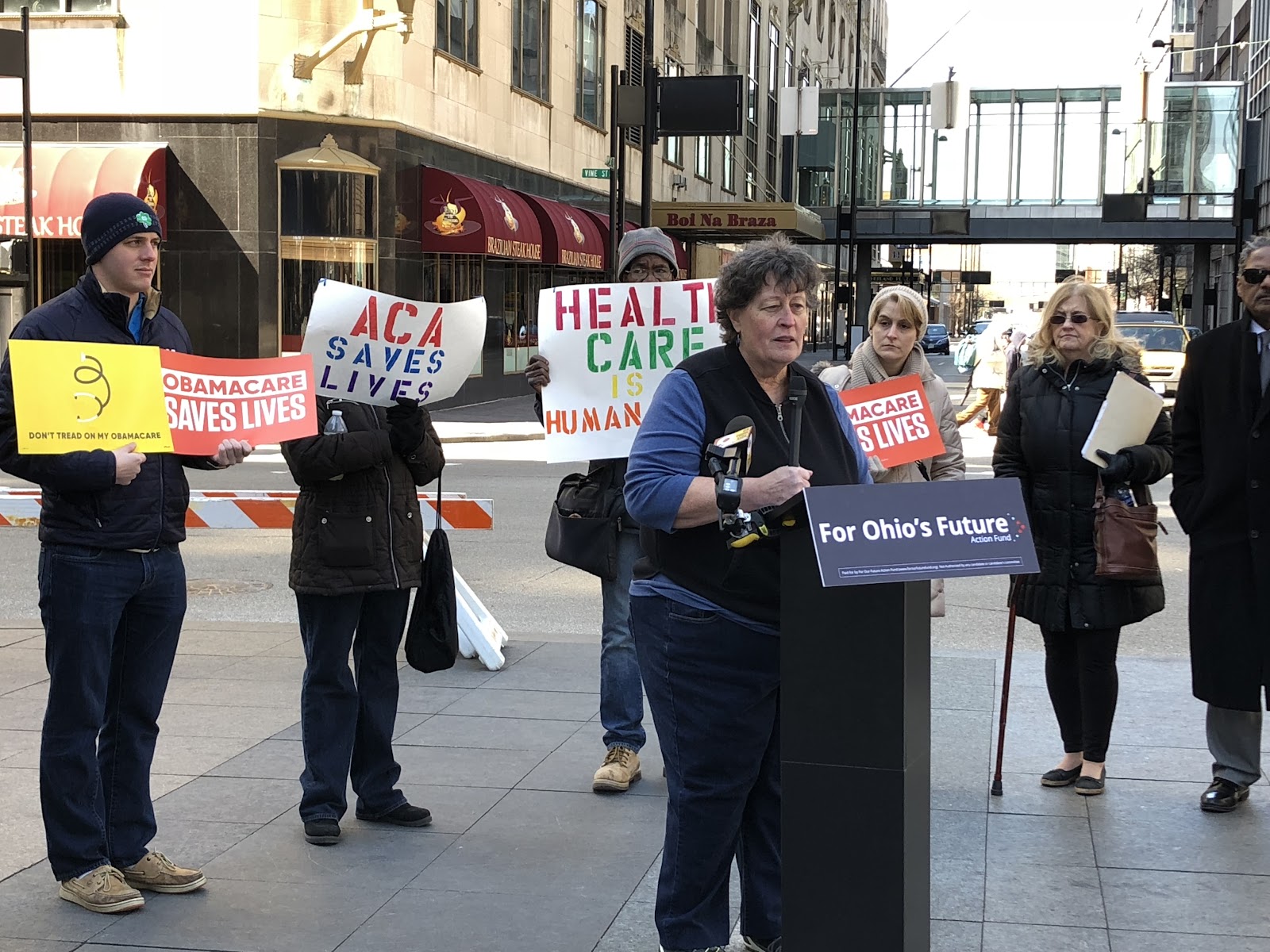 Sally Gasior, center, shares how the Affordable Care Act has helped her son, who has cystic fibrosis.

Thanks to the Affordable Care Act and the law’s Medicaid expansion, Ohio’s uninsured rate has dropped to record lows. Yet Rep. Chabot has repeatedly voted to repeal the ACA, including voting for last year’s failed Republican health care repeal bill. Under that bill, known as the American Health Care Act, 23 million more Americans would have been uninsured, including 43,100 of Chabot’s own constituents.That bill also would have increase annual premiums in Ohio nearly $1,000.

“We cannot go back to the days when parents had to choose between refilling their child’s inhaler or paying their mortgage, when Americans couldn’t get coverage with a pre-existing condition, or when seniors couldn’t afford the price of life-saving medication,” said Cincinnatian Amy Teitelman with For Ohio’s Future Action Fund. “Ohioans like us must let our representatives know — including Steve Chabot — that they cannot put partisan politics ahead of the health, well-being, and economic security of Ohioans and the American people.”

Rep. Chabot should be on notice: Last week, Chabot’s seat was identified by the Democratic Congressional Campaign Committee (DCCC) as a target to flip from red to blue in this year’s midterm election. If the recent Pennsylvania special election is any indication, the Republican health care sabotage campaign is backfiring on Republicans and motivating voters to support candidates who will fight to protect the Affordable Care Act.

Watch the press conference below:

Chelsea Kiene Born and raised in northwest Ohio, Chelsea first got her start in politics when she successfully ran for student council in the first grade. Since then, Chelsea has worked for several progressive campaigns and organizations. Her work has appeared in The Huffington Post, The Nation, The Week, TalkPoverty.org, Greater Greater Washington, The Toledo Blade, and The Cincinnati Enquirer. Chelsea is currently the State Deputy Communications Director with For Ohio's Future, a statewide coalition organization. Twitter: @chelseakiene

Health Care Promises Made — and Broken — By President Trump →

One Response to Southwest Ohioans To Steve Chabot: We Haven’t Forgotten Your Votes to Repeal the ACA